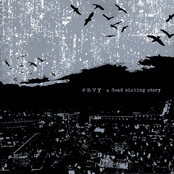 A Conviction That Speeds

A Conviction That Speeds Lyrics & Chords By Envy

A privilege is circling in the sky in invisible speed.
Not knowing anything.
We are obliged only to follow.
With which authority can we refuse?
If I dive off there
It'll beyond me and everything goes forward.
I raise my arm, thinking I understood.
I follow this large line of people.
Conversation is the only way, I release and return.
Connected and go on.
The course to a conclution.
A beautiful time has passed.
Only the darkness and vivid red flash over the road.
The light is too small.
Can't see ahead.
We reach our hands to our destination.
Who is to blame for this heart that killed.
Had a will to return, but he reproached me.
Solidly wait for a next chance.
Why he seems so gentle is because he is wrapped
In a curtain and a shower of light.
And he hides the truth with the language
He had barely studied. We don't wish to, but he talks
The opposite. Holding the peace as an excuse.
Words he tells are vague. Acceptants don't bother to
Replace them into their own words.
They just repeat what they're told.
Even truths are known.
Even everything is understood.
Reconciliation covers whole.
It changes the air. It changes the faces.
Stare at only a moment ahead and hold on to tomorrow.
Not only the right things exist.
Crucial to think about it but the acceptants don't even think.
They pretend they are not listening.
They must have heard.
They must have seen.
Have a conviction but to be vanished deeply in grumble.
The time was surely beautiful.
It had been sunk into oblivion.
Standstill is an absolute necessity. I look around.
Despair and the speed overflow in my mind.

Tracks related to a conviction that speeds - envy

i'll get my just deserve

houses we die in

fuck the men in her life

as far as you can throw me

drama in the emergency room

by: the kodan armada

the spinning heart of the yo-yo lobby

your face is a rape scene

life in a box

implications of a sinkhole personality

by: portraits of past

More From Album: A Dead Sinking Story
distress of ignorance
color of fetters
chain wandering deeply
evidence
go mad and mark
reasons and oblivion
a will remains in the ashes
unrepairable gentleness

footsteps in the distance

we on our way

an adventure of silence and purpose