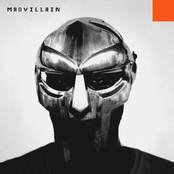 All Caps Lyrics & Chords By Madvillain

[MF Doom]
So nasty that it's probably somewhat of a travesty
Having me daily told the people
"You can call me 'Your Majesty'"
Keep your battery charged
You know it won't stick, yo
And it's not his fault you kick slow
Should've let your trick 'ho chick hold your sick glow
Plus nobody couldn't do nothin' once he let the brick go
And you know I know that's a bunch of snow
The beat is so butter
Peep the slow cutter
As he utters the calm flow (Yo mutha)
Don't talk about my moms, yo
Sometimes he rhyme quick, sometimes he rhyme slow
And vice versa
Whip up a slice of nice verse pie
Hit it on the first try
Villain: The Worst Guy
Spot hot tracks like spot a pair of fat asses
Shots of the scotch from out of square shot glasses
And he won't stop 'till he got the masses
An' show 'em what they know now through flows of hot molasses
Do it like a robot to headspin to boogaloo
Took a few minutes to convince the average bug-a-boo
It's ugly, like look at you! It's a damn shame
Just remember All Caps when you spell the man name
And you know it like a poet, like baby doll
I bet she tried to say she gave me her all, she played ball
All bets off! The Villain got the dice rigged
And they say he accosted the man with the sliced wig
Allegedly, the investigation is still ongoing
In this pesky inition he gots the best con flowin'
The pot doubles, now they really got troubles
Madman never go *pop*!, like snot bubbles

Tracks related to all caps - madvillain

things you can do

light of the past