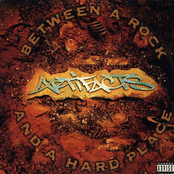 In comes the ones from Jeruzalum slums
Knockin bums out for clout, Jersey rules without a doubt
On the real, keep it kinda fat for the brothers
from the Wrongside of Da Tracks, and it goes like that
Since the beginnin of time, the Artifacts kick rhymes
straight tape after demo tape in eighty-eight
It's so dynamite, shit's outta sight
Snatch up a G and demonstrate for the night
Sip on the brew, me and you can do the do
and you know this, flow with this, Polo, you know kid
Tame, what's the status on the blunt meter homey?
(Yeah I got three dimes, six Phillies, and some Olde E)
Yeah G you know the program, it's so damn ridiculous
Kickin this mix for all the niggaz and the tricks
El the first half, Tame indeed is on?
and word to life he rhyme with spite and so dynamite
"Dynamite soul!"
Yo this flow goes to all the hoes I ever f**ked with
Kids I smoked blunts with, and my ex-girl that sucks dick
Niggaz takin shorts in weed spots because they know me
And to my moms, because she makes good cheese and macaroni
And to the stores that'll sell three Phillies for a dollar
To Afrika Bambaata for makin me a rap scholar
And MC El for rhymin with this notty headed lunatic
You always knew we had the crew that had the mad drama kid
peep it, all my peeps from 12 Block to Broad Street
And backstreets in Jersey where the niggaz first heard me
It took a long time comin with more cuts than Jason
Since the days I had a fade and used to rock in Redman's basement
I do +Poetic Justice+, like Janet played the role
And now I'm makin suckers swoll with the dynamite soul
"Dynamite soul!"
Remember them joints, we used to rock at the spot?
When we stepped on stage with fat gear and it was mad hot?
Kids in competition was scared at the sight
Of these mad motherf**kers who rock the mic RIGHT
Then we was "That's Them", gettin all the action
F**kin niggaz bitches and just leavin them in traction
Ask who the hell was them niggaz that's rippin it?
You better get hip, cause Artifacts got the shit
For about four years, people said we couldn't hack it
but the track's got?, and rhymes got the knack
See, we'll never fall we got support from the fam
Jam after jam, here we are but there we stand
It took mad time, but here we is, in the music business
Press record when you hear me on KISS
Brothers talk shit, but yo, who really cares?
Tame's who all I need 'cause, the brother's right there
And if you're swoll, say it's all in control
The Artifacts, we got, the dynamite soul
"Dynamite soul!"

i got cha opin

straight out the jungle

flava in ya ear

you can't stop the prophet

by: jemini the gifted one

story of my life

by: jemini the gifted one 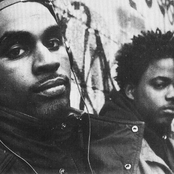 child of the earth

do you wanna hear it

baby that sure would go good