Sousa John Philip
Miscellaneous
The Stars And Stripes Forever
Let martial note in triumph float
And liberty extend its mighty hand;
A flag appears 'mid thunderous cheers,
The banner of the Western land.
The emblem of the brave and true.
Its folds protect no tyrant crew;
The red and white and starry blue
Is freedom's shield and home.
Other nations may deem their flags the best
And cheer them with fervid elation
But the flag of the North and South and West
Is the flag of flags, the flag of Freedom's nation.
Hurrah for the flag of the free!
May it wave as our standard forever,
The gem of the land and the sea,
The banner of the right.
Let despots remember the day
When our fathers with mighty endeavor
Proclaimed as they marched to the fray
That by their might and by their right
It waves forever.

when you were sweet sixteen

invitation to the dance

arrival of the queen of sheba

joy to the world 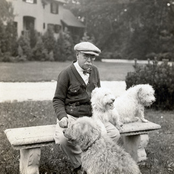 the glory of the yankee navy

beneath the southern cross

in the good old summertime

pet of the petticoats