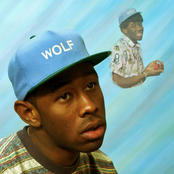 Went to Six Flags
Six fags came up and said "Ayo can we get a pic?" I said no
And they said "Oh it's Wolf Gang, Yonkers, Goblin is my shit though"
Now I'm like, fuck, I dont want to be an asshole
So I'm sitting there posing with Travis, Devon
With a fake smile like her titties was drawing it on
So fucking annoyed because I missed Goliath
Cause some kid said I was there then they caused a riot
Now I'm surrounded by a 25 hound of fuckers tryna get a photo
All because they noticed the top with the box logo
And them fucking ears, guarantee they didn't even hear Bastard
They bandwagon-jumped me from a pogo, I'm going fucking loco
"Hey Tyler can I..." No, bitch, don't you see me tryna buy a fucking churro?
"But Tyler, you're my hero, I used to get bullied
Until I heard Radicals, the last part got to me.
See, I used to give a fuck until my cock would bleed
Now I'm the happiest I think I'll ever ever be
My life is just like yours, no father
My momma must have forgot to stop with a pop condom
In school I was the one thinking outside boxes
So everybody in them would say that I got problems
So when I heard you say it, I said it back like fuck 'em
You're in inspiration to niggas like me
Not the niggas who like you just cause of lyrics and beats
I'm talking about the niggas who dont know where they're going to be
I heard the song Bastard right in the moment of heat
Not in summer, but of course I was holding a heat
Gun on the edge of my feet, I heard that first piano chord
And it drew me in like predators carrying treats
Then I said to myself fuck is he speaking to me
See me and you we go together like snare in a beat
I mean snare and a kick drum, see my forearm
I carved OF on it this morning with a glass shard
On my green miniramp that I built in my backyard (that's weird)
Thats hard, that scar from playing air guitar
When I see you play at the Roxy (uhhhh)
Tyler, I love you, I wanna be just like you (alright)
I think about your face and I don't even fucking try to (no homo)
Wish I had a basement mitt for me to hide you
We could play X-Box and listen to 'In Search Of...' and eat donuts
Over conversating about what church does
Come up with weird ass videos with roach bugs
I'm straight edge too, so no drugs on this trip
And Raquel that bitch, you should've killed that bitch
You should've took me instead (uhhh, thats weird)
See, if you can't have her then he shouldn't neither
And if I can't have you then she shouldn't either
No one should see you, but me in your t-shirt
I worship you until the fucking wrinkles on my knees hurt (what the fuck)
Odd Future, Wolf Gang, Golf Wang, Flog Gnaw, free Earl mobbin
I know it seems like just I'm slobbing on your knob
But I'm just a fan and I ain't losing my fucking noggin (yeah you are)
I ain't got a job and I went out and bought Goblin about 5 times
Cause (thanks for the support) I love you man (alright)
I like tie-dyed tees or just plain white tees, I like pants thats cut
I like words like fuck, I got your pics on my wall
With the mouth cut out, now paper cuts on my balls
Cause your dicks in my jaw (what the fuck)
And I hit you on twitter about 10 minutes a day
And I'm bitter cause you dont even reply with a hey (sorry)
And my boys think I'm gay cause I play VCR
In my car all alone speakers waking up neighbors..."
Alright my nigga, calm down, it's getting weird, take this pic
So I can get on colossus, line as slow as molasses
(tyler listen) no nigga I see you are loving my shit
And I appreciate the fact that you would suck on my dick
But im not gay so its awkward, now I'm grouchy like oscar
After spilling some shit on his newest pair of beige dockers
Yonkers and yonkers (I love that song)
Sick of hearing about yonkers
Im grateful that it worked, I attacked and I conquered
"Yeah whatever but I had a fucking blast at that concert
I was at the Boston one, I got a t-shirt from Sagan,
The one that says Sagan Lockhart
And when you came out to Sandwiches
Thats when my fucking boycrush got started"
Just take this fucking picture man, shit...

Success Will Write Apocalypse Across The Sky - Colossus chords lyrics

take a fall for me (feat. rza)

too bad i have to destroy you now 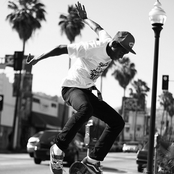 More by tyler, the creator

back for another one