I got 99 problems, and they all bitches
Wish I was Jigga man, carefree living
But I'm not Sean or Martin Louis
I'm that Cleveland nigga rolling with them Brooklyn Boys
You know what I be when you start living large
I control my own life, Charles was never in charge
No sitcom could teach Scott about the dram or even explain the troubles that haunted my mom
On Christmas time, my mom Christmas grind
Got me most of what I wanted, How'd you do it mom? huh?
She copped the toys I would play with in my room by myself
Why he by himself? He got two older brothers - one hood, one good
An independent older sister kept my fly when she could
But they all didn't see, the little bit of sadness in me, Scotty

I'm super paranoid, like a 6th sense
Since my father died, I ain't been right since
and I tried to piece the puzzle of the universe
Split a 8th of 'shrooms just so I can see the universe
I try to think about myself as a sacrifice,
just to show the kids they ain't the only ones who up at night
The moon will illuminate my room and soon I'm consumed by my doom.
Once upon a time nobody gave a fuck, its all said and done and my cock's been sucked
So now i'm in the cut, alcohol in the wound, My hearts an open sore that I hope heals soon
I live in a cocoon opposite of Cáncun, Where its never sunny, the dark side of the moon
So its more than right - I try and shed some light on a man
Not many people of this planet understand, fam


I'm prolly this close to go and tryin some coke
and the happy ending would be slitting my throat
Ignorance to cope man, Ignorance is bliss, Ignorance is love and I need that shit
If I never did shows then I'd prolly be a myth
If I cared about the blogs then I'd prolly be a jackass
Don't give a shit what people talk about fam
Haters shake my hand but I keep the sanitizer on deck
Hope I really get to see 30
Wanna settle down, stop being so flirty
Most of the clean faces be the most dirty,
I just need a thoroughbred cook when I'm hungry
Ass all chunky, brain is insanity
Only things that calm me down - pussy and some cali tree,
And I get both never truly satisfied
I am happy, that's just the saddest lie 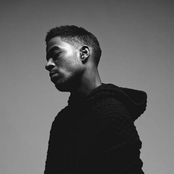 i hear them calling me (tristeza dubstep remix)

i do my thing (feat. snoop dogg)