A Recurring Dream Lyrics & Chords By My Fictions

When I woke up it was cold and I did not know just how long I'd been asleep; anxious from what I dreamt.
So I wrote a forced epilogue about holding on because I've given up on grabbing, I'm just going to let myself fall.
Save the miserable lines for another time; I've been collapsing into myself to much to focus on a few words.
It's an insignificant song I don't care about because the saddest songs I ever wrote were sewn from all the things I stole.
I never had and I'll never know because I didn't want to.
All that you're taking is that which I did not want if that means anything.
I'm not sure if it even does, but what is anything I have but a speck of insignificant luck?
All I know is I don't feel so inclined to rid myself of the way that I feel when I feel like I've wasted your time.
Let it rest, well goddamn it I guess I'll get back to it, I've been leeching of the past I have sucked the blood from what was left.
This exercise in autobiography should be torture for someone as removed as me, but I leech.
If it lasts forever, then why document?
They say everyone feels it, but it's still not resonant.
Misery, you found me, I always knew you'd come for me.
You've been speaking to me in my goddamn dreams but by the time I woke up you had come and left me.
We speak of holding on but we have no idea to what or why, we just hope that if we extend our reach we can latch ourselves to something out of sight.
And the worst is I saw an end to this.
But that wasn't enough I guess.
It wasn't enough to know that I'd be miserable - I had to lie in that grave.

Tracks related to a recurring dream - my fictions

by: birds in row

by: birds in row

the view from below

our hearts remain the same

in g and e

a visit from dr. goodsex

we left as skeletons

punk rock in the wrong hands

loss will find us

by: the saddest landscape

tide/this place is a prison

and now everyone sings the blues

i have seen mountains

the charme of dominating 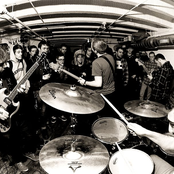 More by my fictions

i am an ornament