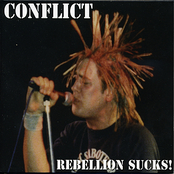 From St Pauls To Seattle

From St Pauls To Seattle Lyrics & Chords By Conflict

From protest to resistance
The abolishment of power?
He monitors the obvious.
Question - from control tower;
Is protest when they hand out leaflets
Or riot through the streets?
Answer - whatever, they don't stand a chance.
Ignite; we're turning up the heat.
They took a fucking liberty last year.
Let's see them try it again.
They desecrated the cenotaph.
Did you see our finest leader's head?
So, we portrayed them in the media,
Which it seems no one has even seen?
Scum don't know what's right and wrong.
There's no excuse for what they've done.
An excuse, do you want one?
Ok, how about this for a start.
If you're too stupid to listen to common sense's heart
Then expect time and time and time again
Our anger to resist.
It's not your world; it's everyone's.
Unlike the cherished power that you insist
Is to:
Hold on you fucking anarchist scum,
Be warned our force is second to none.
Surveillance! Monitored movements!
Is zero tolerance so unclear?
It means get back and stay put.
No opinion, don't concern.
Now get the point - or feel it.
Will you moronic bastards ever learn?
We bow to no one.
From St. Paul's to Seattle,
There's now millions who won't be taught.
Who don't obey, confirm, conspire,
Whose views cannot be bought
And sold by banks and governments
To accept and follow blindly.
As they destroy our planet
Our song always remains defiant.
Those who care unconditionally,
Who don't hold their hand but bite it.
Who won't accept but refuse,
They have nothing left but to fight it.
Standing firmly in the future
With one foot holding open the door,
Our message as ever, simple;
We won't take your shit no more
Resist, exist.

Tracks related to from st pauls to seattle - conflict

(i'll drink to this) love song

holiday in the sun

slit your own throat

by: a global threat

where the money's gone

by: a global threat

by: one way system 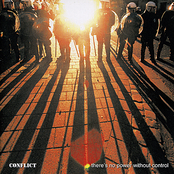 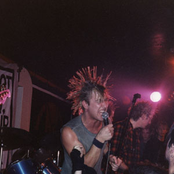 alcohol and a knife